Room Occupancy: 6 in a Family Suite, 4 in a Standard Room, both will allow one infant 2 and under

Disney’s Art of Animation resort opened in May of 2012. The resort features 1,120 family suites themed around such Disney animated classics as Finding Nemo, Cars and The Lion King. The Little Mermaid building houses an additional 864 standard guest rooms. Family suites are around 565 sq ft, and standard rooms are at 277 sq ft.

Art of Animation Resort brings the movies to life more than any other Disney resort on property, as the lobby is filled with pencil sketches, including a massive chandelier (with a few celeb touches!).  Originally, Art of A was slated to be the 2nd part of Pop Century, becoming the Legendary Years with buildings themed to the first half of the 20th century… however, Disney only got one building completed before the 2002 recession forced Disney to scrap those plans.  So when they decided to turn that area into another resort, they left the completed building in place, theming it to Little Mermaid, building Family Suites in other buildings themed to Cars, Lion King & Finding Nemo.

The two resorts sit close, only separated by Hour Glass Lake, with a bridge connecting the two, and both are within walking distance of a Skyliner Station.

After seeing the beautiful lobby, you can walk right past the color script wall, through the Ink & Paint Shop gift shop, and into Landscape of Flavors, a delicious food court area divided into 4 parts, each part representing a movie themed in the resort (and each giving various menus of food)

Art is considered a “Value Resort”, Little Mermaid rooms tend to price a little higher than similarly laid out rooms in other value resorts, and the Family Suites are priced higher than similar suites in All Star Music, due to the popularity of the resort. 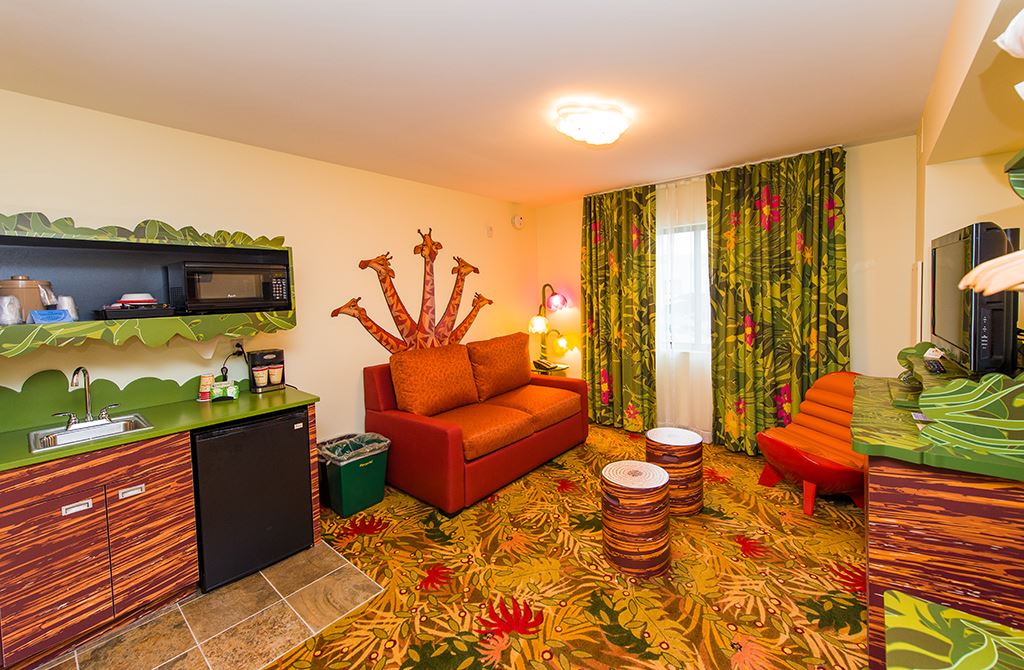 A look at the common room of the Lion King Suite (the rooms are identical in layout, different in theming)

As mentioned, each of the four main buildings are themed to a different classic Disney film, and each has their own theming and decor both in the rooms and outside the main doors.

1,120 family suites are divided between The Lion King, Cars, and Finding Nemo buildings.  These suites each sleep six guests and have a kitchenette, 2 bathrooms, a master bedroom and 3 separate sleeping areas.  One interesting feature of these rooms is the “Inovabed” – a table that converts to a bed in seconds.

CARS — the Cars area sits around a blacktop street walkway and a quiet pool, adorned with Cozy Cone Motel theme and cone-shaped cabanas.  The room is set up like a garage, with a car seat style couch, a toolbox dresser, and full map of Radiator springs on the tables.

LION KING — Set in an African landscape, you’ll see not a pool, but an Elephant Graveyard playground area with Mufasa looking on.

FINDING NEMO — Here is where you’ll find the “Big Blue Pool”, the largest pool on property (12,000 sq ft!) with it’s own magic — as in, you can hear the music from the film just by sticking your head under water. Inside the rooms you’ll also see coral shaped chairs and bubbles on the ceiling, while the bathroom has a submarine motif, with a porthole shaped mirror. 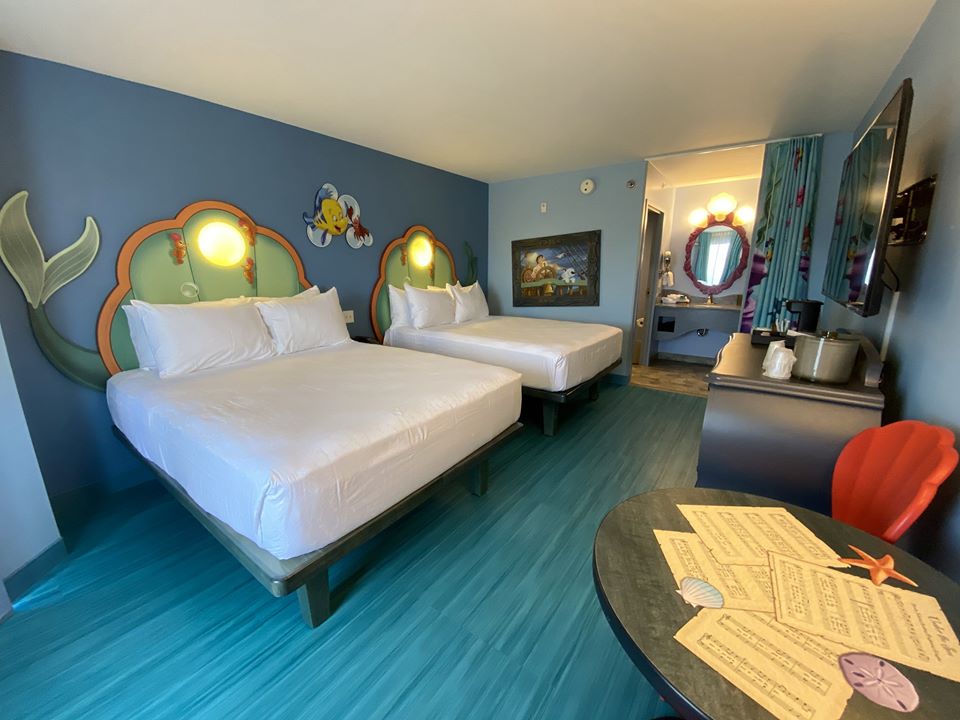 The standard room layout of the Little Mermaid room

A standard room with two queen beds, single vanity, and newly refurbished hard floors. Unlike the newly refurbed Pop Century and All Star rooms, the Mermaid room at Art doesn’t contain an “inovabed” (a bed that flips up to the wall, leaving a table), it just has two regular beds. There are 864 LM rooms.

Meals here are available as a counter service meal on the Disney Dining Plan, while most snacks offered are considered snacks on the dining plan.

KIDS
Besides the obvious three pools and Elephant Graveyard playground, Art also features poolside activities that start in the afternoon and run into early evening. You can also find pool and dance parties in mid-afternoon, and typically, a Disney film will be shown in the Lion King courtyard nightly (check schedule)

They also feature the “Sketch Artist of the Day”, where kids can sketch their favorite Disney character and bring them to the front desk by 4pm.  They unveil the winning sketch in the lobby around 545p daily. Get the info at the front desk!  And if drawing is your thing, they do feature a Draw Class in the playroom at 11a, 2p, and 5p.

You can also visit the Pixel Play Arcade by the main lobby, offering a wide variety of games for everyone (even featuring some of the old school games)

Babysitting Services -Two popular options include KID’S NITE OUT, INC, whch provides in-room and in-park childcare in the Walt Disney World/Universal Area. Base hourly rates are available for a four hour minimum. You can find them at kidsniteout.com. Another option is EXTRA HANDS VACATION SERVICES, which also offers in-room and in-park childcare. Visit them online at vacationsitterfl.com. Both services offer employees who are security-checked, bonded, and trained in CPR (The Walt Disney Company does not run or own these services, nor does Magic on a Dollar have any connection — this is merely for informational purposes… these are your kids, so do your homework)

RECREATION
In addition to the themed buildings, there are 4 courtyards at the resort – each one inspired by the four films represented here.  Each courtyard features icons and sculptures for kids to play with and around. 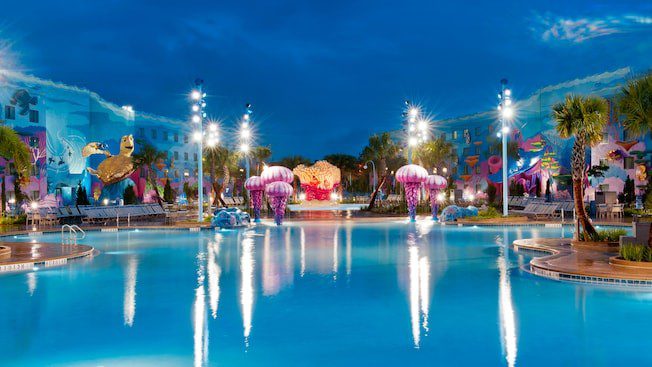 The main pool at the resort is in the Finding Nemo courtyard – the “Big Blue” pool, themed around the film.  At 11,859 square feet, this is the largest resort pool at Walt Disney World.  While underwater, you’ll hear music and the voices of Nemo, Dory and Crush.  A giant Mr. Ray, whose wingspan is 27 feet, looks over the area, which includes a colorful reef and the East Australian Current.  Get your picture taken with Crush or one of the other 2,500 figures decorating the resort.  A children’s splash area, the Righteous Reef, is the perfect place for your kids to cool off with Squirt.

For more poolside recreation, guests can head to the Pixel Play Arcade or the Drop Off pool bar.   “Quiet pools” are located in the Cars (Cozy Cone Pool) and The Little Mermaid (Flippin’ Fins Pool) wings.

TRANSPORTATION
Disney buses run to each of the theme parks plus Disney Springs approximately every 20-30 minutes. The bus marquees will indicate the buses’ main destinations.

The Disney Skyliner gives resort guests another means of transportation! Disney’s Pop Century Resort and Disney’s Art of Animation Resort will share a Disney Skyliner station, where guests can ascend over Hourglass Lake and enjoy a panoramic view of these two colorful resorts on their way to Caribbean Beach, Riviera Resort, Hollywood Studios, or Epcot.

Guests who drive either their own vehicle or a rental car to Walt Disney World should know that a parking fee of $15 per night will be assessed at the end of your stay. 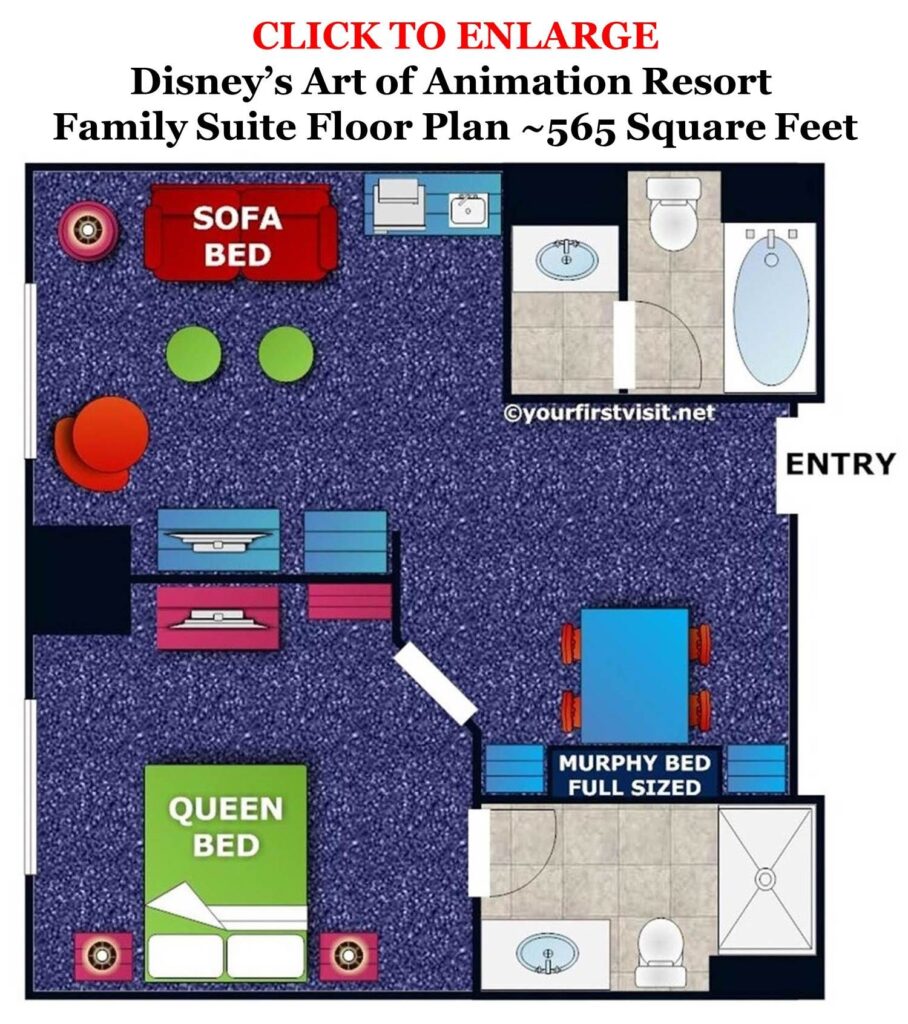